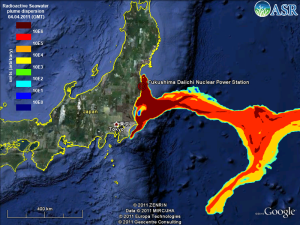 BLOOMBERG—Seaborne radiation from Japan’s wrecked Fukushima nuclear plant will wash up on the West Coast of the U.S. this year. That’s raising concerns among some Americans including the residents of the San Francisco Bay Area city of Fairfax, which passed a resolution on Dec. 6 calling for more testing of coastal seafood. At the same time, oceanographers and radiological scientists say such concerns are unwarranted given existing levels of radiation in the ocean. The runoff from the Japanese plant will mingle with radiation released by other atomic stations, such as Diablo Canyon in California. Under normal operations, Diablo Canyon discharges more radiation into the sea, albeit of a less dangerous isotope, than the Fukushima station, which suffered the worst nuclear accident since Chernobyl. Read more here.